If You See It, You Can Be It 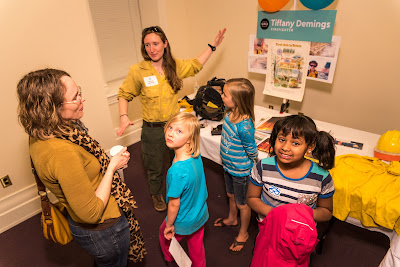 I presented at a cool event aimed at showing young girls the many career opportunities available. It was an all day event where girls age 8 - 12 could meet with real-life professional women in various capacities. There were doctors, pilots, authors, artists, graphic designers. The event launched with a keynote speaker and short introductions by each female professional and then dispersed to individual tables or booths where the girls could meet with each professional woman one-on-one or in small groups. I was there, of course, representing women in wildfire and sharing information about the various careers in resource management. There were so many girls who came to my table who never even considered the idea that they could be a wildland firefighter. Some were still a little skeptical about it when they spoke with me, but I think it helped them to see me there in my nomex and leather boots. Even if they don't immediately see themselves becoming a firefighter, now they know its possible. I was reminded of that very moment for me as a sixteen-year-old girl. It was while I was on camp crew that I got to see the dirty, ash-covered, worn-out firefighters.  I talked to a few of them, overheard conversations at dinnertime, and watched them as they came into camp at night and left in the morning.At first I thought the firefighters were cool, but I didn't think I wanted to be one. Then I saw 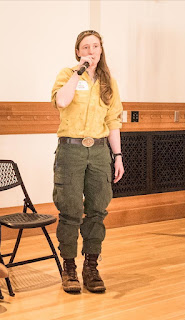 her. The one woman in what seemed to be hundreds of men. She was covered in black ash from head to boots. Her hair was tied back in a messy ponytail and sticking out in places. And her teeth were so white. I know because she was smiling. I never forgot about her, and ultimately, she inspired me to become a wildland firefighter. Seeing her in the fire camp proved that it was possible for women to fight fires. I don't know that I ever consciously thought that it was a man-only job, but I'd also never really thought it could be a job for women until that day.
There are some pretty incredible leaders in fire who have paved the way for women to make it to some of the top positions in fire and resource management. Oddly enough, I've heard some of these women state that they don't really consider the impact they have on other women and some don't want to be viewed as a pioneer specifically for women. Whether they have stuck with their career or worked hard to progress with the intent of inspiring women or not, the impact is still the same. When I see women holding positions like Hotshot Superintendent, Type 1 Incident Commander, National Director of Fire and Aviation --suddenly these positions don't seem so far out of reach as they did before.

5 Ways to Check Your Unconscious Biases Against Women